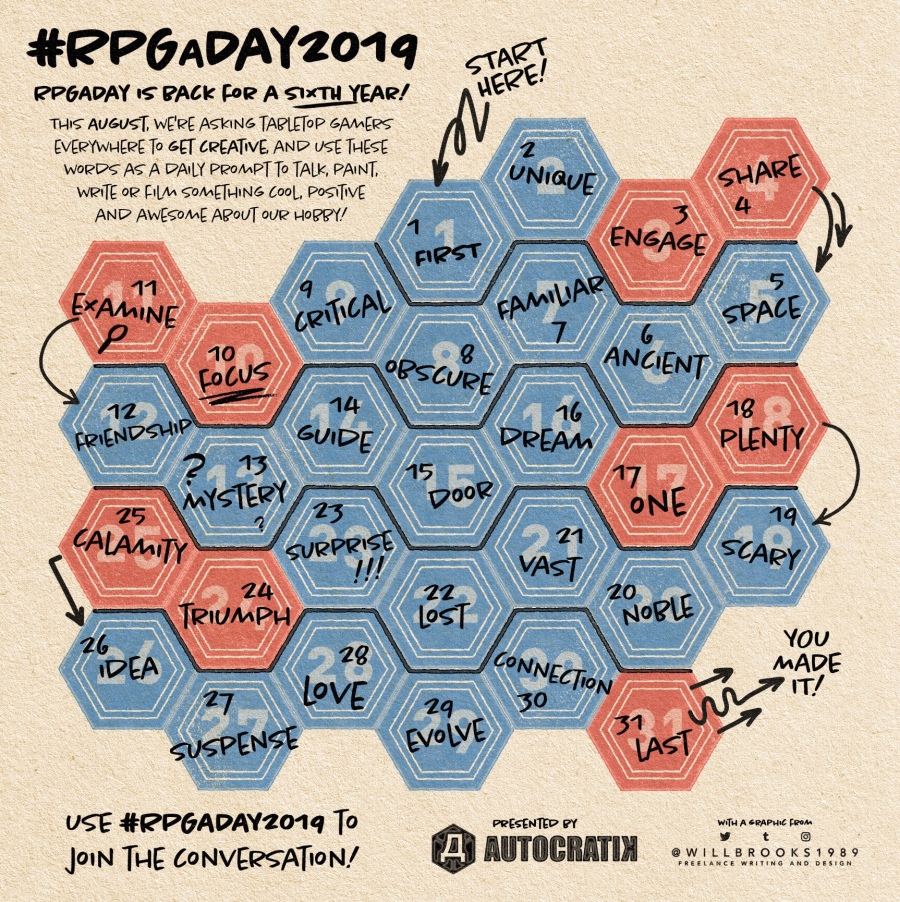 Love is an overused word. I suppose it has to be. The English language just doesn’t have the nuances in this area that many others do. We don’t have the differentiations that something like Greek would allow. I love my daughters, I love chocolate, I love role-playing games, I love the autumn, I love my favorite pair of old shoes, I love playing live music, I love some of my friends unconditionally. Same word, but it conveys very different meanings depending upon context.

However there is great fortune in this ambiguity today because I can essentially talk about whatever the hell I want. And that’s something I love to do.

I love it when the other players at the table are really into the game. This really has nothing to do with me being the game master or a player of a single character. Regardless of my function at the table and regardless of the roles played by the other people, it brings me great joy and satisfaction when they are fully engaged with what we are doing.

Even if I’m already jazzed about what we are doing I can’t help but find their enthusiasm and excitement infectious. Likewise, when shared by everybody at the table that zeal and avidity has a habit of growing exponentially. I love it when this happens. It is a phenomenon that is to be cherished and cultivated.

Quite recently the group I was running lamentations of the flame princess for decided to switch gears at my request and we started up a game of Leagues of Cthulhu by Triple Ace Games. Despite YouTube no longer offering easy streaming via Hangouts we were able to record the session and add it to the playlist.

All the players have been quite enthusiastic about playing in the 1890s and the intrepid spirit of Leagues of Adventure. It remains to be seen how excited they are when they start to encounter the truly horrible, but we’ve already talked about the degree we want that to be present in the game.

All of them have been great so far but it only feels right to single one out today.

Jose has been fun to play with ever since I met him. But it has been really nice to see just how enthusiastic and invested he has become in this particular game, genre, and in the ubiquity system. He an admitted old West fanatic, so of course he created a cowboy type scout who has joined up with a league who recognizes his talents. He knows the tropes very well so how he plays Cord McNally it spot on, and the pulp heroics abound.

I love how he is doing all that, but what I really love most of all is how much effort he has undertaken to learn the system. It seems that he may know how ubiquity works better than I do! I swear he has a mind like a steel trap, and when a question about the rules comes up he is very often the first one to have the answer. Although this is a little embarrassing, it is awesome to see the enthusiasm and investment in the game. It definitely makes my job much easier.

Although I have singled out Jose, it’s only fair to say that Del, Todd, and Eloy along with Jose make running this new game very easy. Everybody is engaged and active. Everybody has showed up to play, and play they do.